Black holes. The name itself invokes mystery among the populace. They seem formidable, intimidating, “far out”, even mystical. Ask anyone in the street, “What is a black hole?” And you are almost guaranteed an iteration of the answer, “Um, like, aren’t they those things that, like, suck things up in space? Right?”

The large majority of people have an almost unshakeable belief that black holes act as interstellar vacuum cleaners. And I’m sure that you can predict my next statement: all of them are wrong.

Black holes are not these mysterious objects that—well, they are mysterious, but the point is that they don’t “suck things in”. A more apt way to consider black holes is the statement that “things fall in them”.

Black holes are distortions in the space-time continuum—or the hypothesized theory that time is the fourth dimension and that it is intimately linked with space in a so-called continuum—that have exceedingly strong gravity. Its gravity is so strong that even photons—the fastest particles in the universe—can’t escape their gravitational pull.

There are a few ways that we can visualize this “strong gravity”, and the most popular way is to visualize the space-time continuum as a sheet stretched to its limit. Now, imagine putting a tennis ball on the sheet. This will cause a dent, or depression, in the sheet. If one rolls a marble on the sheet, it will most likely fall towards the tennis ball. If the marble is fast enough, however, it will zoom past the ball and off the sheet.

Now, imagine putting a bowling ball on the sheet. Assuming that the sheet does not break, the ball will cause an even greater dent, or depression, to appear on the sheet. Now, the marble will roll towards the ball at an even larger speed, and it will require a higher velocity if the marble wants to escape the “gravitational pull”.

This is a relatively accurate model of gravity, and it was proposed by the one and only Albert Einstein! Several questions may arise from this model, such as how exactly do objects orbit other objects? What really is gravity?

That, however, is a lesson for another time. Let us get back to black holes.

So, with this visualization of the universe and gravity, black holes can be considered to be “bottomless pits” in the continuum, and if objects fall in, there is little chance that they will be able to escape.

The figure that describes it best is here: (courtesy of Astronomy Stack Exchange) 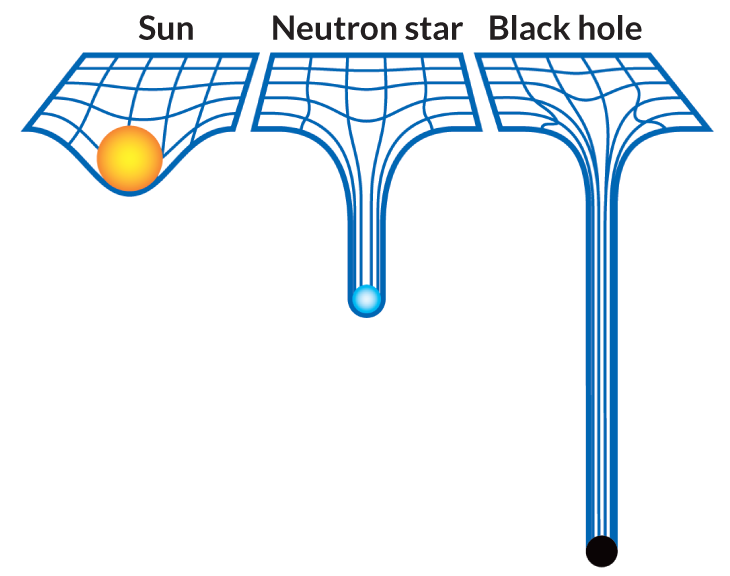 The sun, as it is seen, does not have as much of gravitational influence, even though it is considerably large in real life. This sort of image gives you an idea of the vastness and the scope of the universe as well as an idea of how gosh darn strong the gravity of black holes is!

Another commonly held stigma is that nothing can escape black holes. And that is true…to an extent. Stephen Hawking proved that black holes will not hold objects forever…and there’s a nifty way that he did this. Basically, he came up with the concept of Hawking Radiation. And while that sounds complicated, let me break it down for you, step by step.

The answer stems from one word: antimatter.

Yes. Go ahead. I’m waiting. “But… antimatter is science fiction! It’s like… Star Trek! Antimatter engines, right?” And I’m here to tell you that until 1932, scientists did not believe in antimatter as well.

As scientists made more and more observations of antimatter particles, they quickly discovered that when antiparticles met particles, the two annihilated into pure energy. Sounds exciting!

In fact, this annihilation results in the formation of more particles, typically photons. In the case of higher speeds, exotic, new particles are created. This is, in fact, what they do in particle accelerators. They smash together subatomic particles to create—you guessed it—more subatomic particles! It’s actually quite fascinating.

Now, follow me closely here. The antiparticles have a negative mass, and as they fall into a black hole, the mass of the black holes also lowers. It gets lower and lower, shrinking and increasing in density until finally, it explodes into nothingness! Just like that!

Now, whatever was in the black hole is released, but it is likely already ripped apart at the molecular level. So if you take a trip to a black hole thinking that you can return, be prepared to return in the form of …nothing. So, if you hypothetically could reconstruct the molecular soup that is released by the black holes, you could technically recreate what was in them in the first place. Couple limitations to this, however:

Thank you for reading this article! I hope that you learned something new about black holes and about the wonders of our universe. I implore you to look at the sky the next time you go outside. Who knows what you may see?