As the passage of times proceeds onwards—and more and more people get vaccinated and follow guidelines for COVID—the number of cases and concurrent deaths continue to decrease. This news serves as the light at the end of the tunnel for several people trapped in circumstances by the onset of COVID; we can now have hope that the world will return to normal as soon as can be expected.

In light of this new—well, light—I thought we’d discuss today something equally eruptive and bright in the universe: cataclysmic variable stars. These exciting objects routinely light up the night sky with a flare that illuminates telescopes and the naked eye alike. But what are they?

All in good time! For now, sit back, relax, and enjoy the ride.

Before we discuss cataclysmic variable stars, we must understand what a variable star is. From there, the “cataclysm” part is not a difficult addendum. 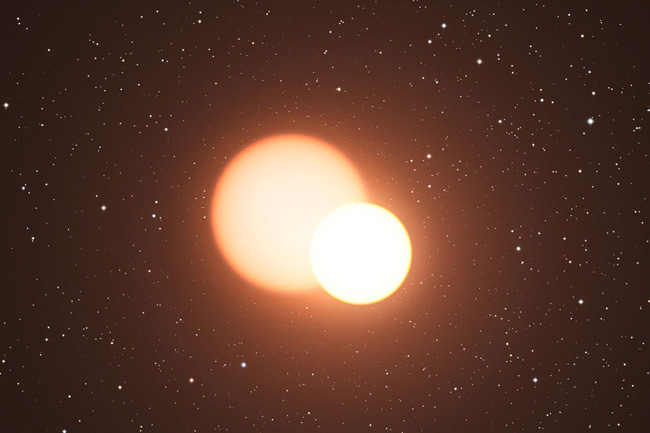 A variable star is a star that varies in its output of light over time, typically varying from brighter to dimmer over time. There are two general types of variable stars:

Cataclysmic variables are all intrinsic variable stars, eruptions on their surface fueling their variation—and, with the moniker cataclysm, their eventual death. But how do these eruptions happen?

In a cataclysmic variable, the mass-transferring secondary is pulled within the Roche lobe—or the extent of the gravitational influence—of the white dwarf primary. As the material is drawn in further and falls on the surface, the mass ignites, increasing the temperature and luminosity, and bam! A nova—a transient astronomical event that creates brightness on the magnitude of stars—appears.

The cataclysmic part of cataclysmic variables is due to the fact that this nova often destroys the progenitor star in the system—a Type 1a Supernova (as seen in the image) is an example. But, for a moment, the universe is illuminated by the intense brightness of several stars.

These are some of the most exciting stars in the universe as they are immensely rare. But even more exciting is the variety that they offer. There are so many subtypes of cataclysmic variable stars, each one interesting in its own right, each one important to study to better understand the way that the universe works. Let’s take a look at some of these below:

Whew! That’s quite a lot of information. But I hope I am able to do justice to these fascinating objects by offering you all a peek into their world. Oh, and one more thing before we go. One of the most interesting phenomena in cataclysmic variable stars is a superhump, which occurs when the accretion disk of the nova deforms and resonates with the rotational period, causing an Extra Bright™ burst of energy. Pretty cool, huh?

Next time, we’ll delve into more funky astrophysics throughout the universe. Don’t lose yourself in the cosmos before then…