Recently, the skies of the northern hemisphere were graced by a new guest, streaking across the heavens, leaving a beautiful white trail in its wake. I am referencing, of course, the comet Neowise.

It is truly an amazing experience, visualizing an immense icy chunk of rock and ice hurtling through the onyx nothingness of space, gleaming in the rays of the sun, illuminating a glowing trail behind it. I would definitely recommend trying to catch it!

Given the current presence of our newest outer-solar-system companion, I thought it would be a good idea to spend today’s blog post discussing comets: what they are, where they’re from, their orbits and their characteristics.

So sit back, relax, and let us begin discussing these beautiful interplanetary objects!

The white apparitions streaking across the sky have captivated imaginations from ancient times. In fact, the word “comet” is a Latinization of the Greek word κομήτης, which translates to “head of long hair”. Ancient Greek astronomers referred to the tail of the comet as similar to flowing hair (and it does look like it!)

Comets were often considered as harbingers in ancient times; people believed that they would signal attacks, inauspicious reigns, or even the forthcoming death of monarchs. They were believed to be messages sent by the gods.

Aristotle was the first known scientist to study comets in great detail. He believed that the comets were merely atmospheric phenomena, as they appeared outside of the Zodiac. However, when Newton postulated orbital theories in the late 1600s (read my article on orbits for more information), he demonstrated how a comet’s track through the sky could fit a highly eccentric (or stretched out) elliptical orbit.

The most famous studier of comets is, of course, the astronomer Edmond Halley. Building off of Newton’s principle, he noticed that an apparition that had been recorded in 1531, 1607, and 1682 had very similar orbital elements. As a result, he reasoned that the comet should follow the same pattern, and should return.

This reasoning was confirmed by a group of French mathematicians, who predicted the comet to return in 1759. After they were able to predict the comet’s return to an accuracy of one month, it was labeled as Halley’s Comet. It was last seen in 1986, and will return in 2061. 41 years to go!

After comets were confirmed to be interplanetary travelers, astronomers began to study the composition of comets in much more detail. Here is a labeled image of a comet. If some of the parts don’t make sense, don’t worry! I’m here to break them down.

Credit: The Why Files

The first part of a comet is known as a nucleus. Much as the nucleus of an atom, or the nucleus of a cell (or the nucleus of a friend group), it forms the center of the comet, and contributes the most to its size and mass. They are typically made of dust, rock, water ice, and trace amounts of frozen carbon monoxide, ammonia, methane, and carbon dioxide. It is due to this composition that they have gained the popular moniker “dirty snowballs”.

The second part of a comet is known as the coma. And no, don’t confuse it with the medical definition! A comet’s coma is simply a thin but huge atmosphere of water and dust formed by the offshooting of material on its surface. This can often be visible when reflected by sunlight.

The third, and final main part of a comet, is known as the tail. The tail of the comet is made of ionized dust. A common myth is that the motion of the comet causes it to have a tail. In fact, it is the solar wind (read my article on the Sun to find out more) that causes the dust from a comet to become ionized and push it away. As a result, a comet’s tail will always be pointing away from the Sun.

Now that we’ve discussed the important facets of a comet’s makeup, let us discuss where a comet comes from.

Most comets originate from the outer solar system, beyond the orbits of Neptune and Pluto in a region that is known as the Oort Cloud. Under the influence of the Sun’s gravity, they get pulled into long, eccentric orbits.

This results in one year for some comets being the equivalent of about 200 to thousands of Earth years. And you thought that it was a long wait for Christmas! These comets are also known as long-period comets because—well—they have long periods! As these comets have such stretched orbits, they have relatively constant journeys, unhindered by planetary positions.

On the other hand, some comets originate from an area closer to the sun than the Oort Cloud known as the Kuiper Belt. As a result, these planets have consequently shorter periods, typically being less than 200 years. These comets have been assigned the aptly-defined moniker short-period comets. Interestingly, Halley’s Comet is the only known short-period comet that is regularly visible to the naked eye, and the only naked-eye comet to return twice in a human lifetime.

Now, much like planets, comets have also been discovered in other stellar systems! Almost 11 such comet systems have been found, orbiting other stars in our galaxy. These exocomets have also been shown to be the reason that a dip was found in the spectrum of a star (read my article on exoplanets for more information), not an exoplanet as was previously thought.

Ok! So far, we have discussed the parts of a comet, their birth, and their orbit types. Now, let us discuss the second to last stop on our journey through the scintillating world of these scintillating objects: their death.

There are three main ways that a comet can meet the end of its life. Let us discuss them!

The first way that a comet can meet the end of its life is known as solar system ejection. This is exactly how it sounds; if a comet gains enough speed, its orbit will change from elliptical to hyperbolic and it will whiz out of the solar system. This gain in speed typically occurs if a comet brushes near a large planet, with the gravity acting like a catapult and speeding it on its way.

The second way that a comet can meet the end of its life is known as exhaustion of volatiles. Every time that a comet gets close to the sun, some of its ice evaporates. After anywhere from 50 to 2000 such cycles, the nucleus evaporates completely, leaving only a small dark rock resembling an asteroid. This small dark rock is also known as an extinct comet, and scientists hypothesize that as many as 6% of near-Earth asteroids are, in fact, extinct comets.

The third way that a comet can meet the end of its life is known as breakup and collisions. Space is an unruly place, and comets hurtle through vast fields of rock as well as face intense temperature changes. If the nucleus of the comet is weak, it will tend to break apart due to such conditions. A spectacular example of this is the Comet Shoemaker-Levy 9, which broke apart and plunged into Jupiter’s atmosphere, leaving deep red gashes in the surface. Here is a picture of the event: 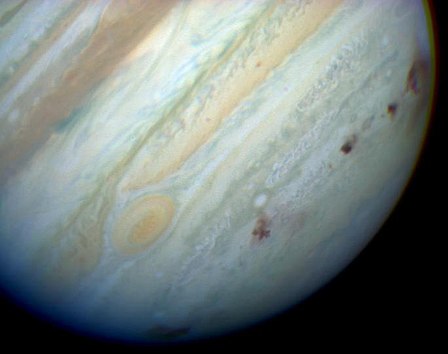 The visible brown-red patches are the places where the pieces of the comet penetrated the Jovian upper atmosphere
Credit: NASA

Of course, sometimes a comet can plunge into the Sun if it gets too close. These events, while not as vivid or rare as the one mentioned above, are still watched with great interest by professional astronomers.

Now, last on our docket for today: the significance of comets. Given the amount that they are studied, you may expect them to have more significance than just hapless interplanetary wayfarers. And you would be right!

Scientists hypothesized after the discovery of organic hydrocarbons on comets that they could be the reason that the Earth has life! The immense amount of collisions would have allowed organic hydrocarbons—and, therefore, amino acids, the building blocks of life—to find their way to our planet. And, of course, if not for those ancestral amino acids, I wouldn’t be here to write these words and you wouldn’t be there to read them.

And we have reached our destination! I hope you enjoyed reading this as much as I enjoyed writing it, and I hope that you learned something new. I also hope you all stay safe! Try to catch sight of our little neighbor while you can—you won’t get another chance in 7,000 years.