NOTE: ALL IMAGES (and caption) CREDIT TO NASA

We interrupt our regularly scheduled programming to discuss one of the most exciting advancements in astronomy and astrophysics of the last decade; the James Webb Space Telescope has finally returned its first images of the universe! Check out Part I and Part II of my series on the telescope to understand the context of the launch and discover why it is such an impactful launch.

Yesterday, NASA publicly released the first full-color high-definition observations conducted by the telescope. And they are, needless to say, stunning.

This interim blog post will include each image along with a brief description, including NASA’s captions and my thoughts. I hope you enjoy! We are all incredibly blessed to have the opportunity to board this train to the depths of the cosmos at its outset; the Webb is going to be a tremendously influential force throughout the progression of this century, a human eyepiece not only into the heavens but into the past, a stunning revelation of our cosmic origins, while a meditation on the sheer scale of natural beauty in the macrocosm. It gives me chills just thinking about it.

But before we begin! In order to see how much of an upgrade that the Webb really is from Hubble, take a look at this website, courtesy of self-branded physics major turned software developer John Christensen. Exploring the facets of different images is devilishly cool, and you can see how better infrared instrumentation can, quite literally, see farther into the past.

Alright, now that I’ve finished gushing over how incredible this is, let’s dive in and look at these images!

Brief note: anything not italicized is official by NASA. Interspersed are italicized comments by me! 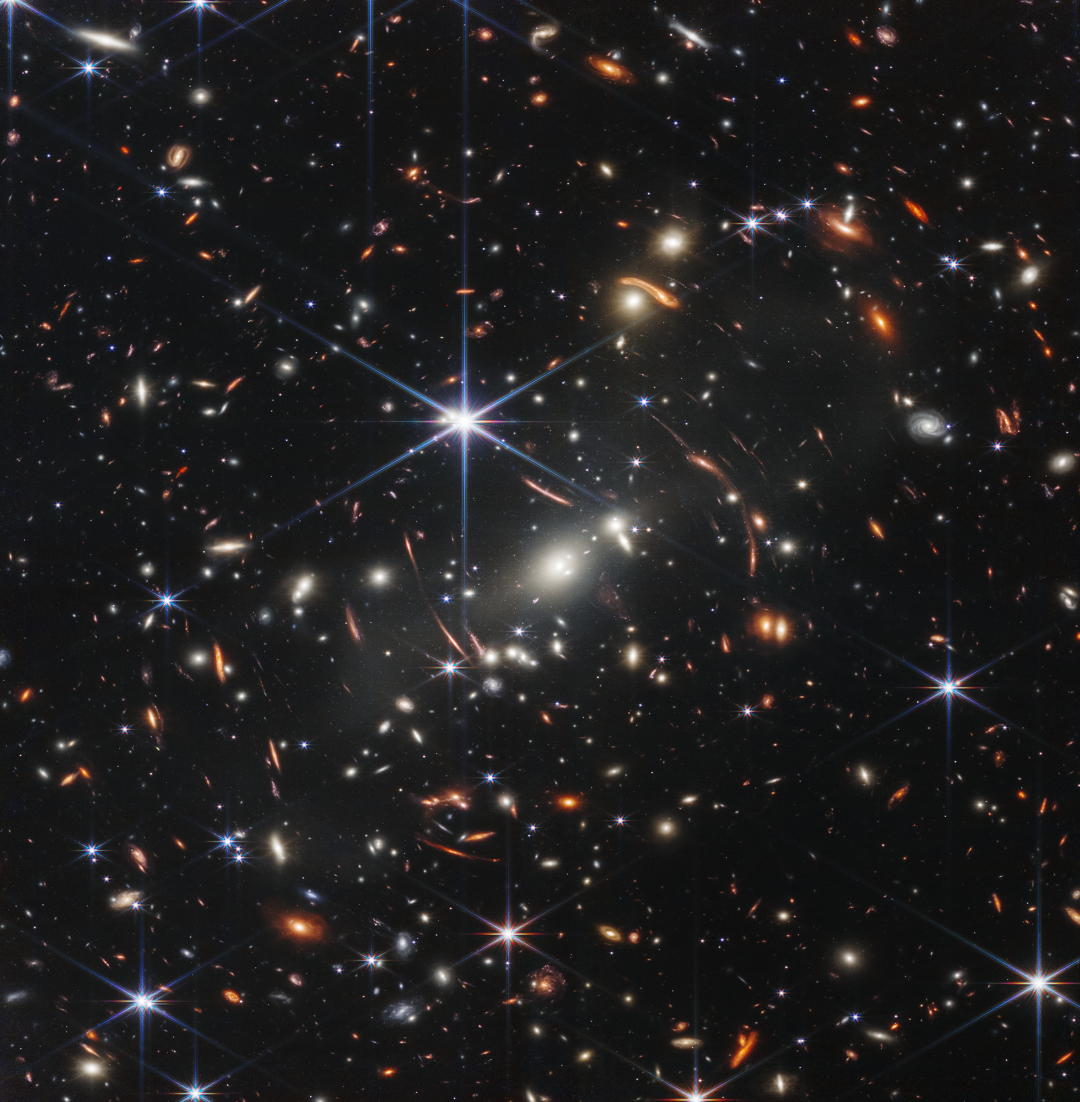 The deepest, sharpest infrared image of the universe ever.⁣

[This is] very first image released from the James Webb Space Telescope, the world’s most powerful space telescope. Capturing this was all in a day’s work. (Literally! Webb captured this image in less than a day, while similar images from Hubble can take weeks.)  Which is so crazy if you think about it; the processing speed and the light-gathering capabilities of the Webb are significantly larger than that of Hubble. Which was already impressive!

If you held a grain of sand to the sky at arm’s length, that speck is the size of Webb’s view here. This should give you an idea as to how insanely large the universe really is. Even though the view that we have of the cosmos through the telescope (in this image) is minuscule, the power of geometry translates it into a vast area spanning innumerable galaxies.

Imagine — galaxies galore within a grain! Why do some galaxies appear bent? The combined mass of this galaxy cluster acts as a “gravitational lens,” bending the light rays from more distant galaxies behind it, magnifying them. ⁣The phenomenon of gravitational lensing was actually the first proof that we had that relativity is real! Einstein predicted that gravitational lensing would occur based on his theories of spacetime curvature and a whole bunch of complex relativity we will discuss one day, and during an eclipse, the first gravitational lens was observed. Seeing it once again in this image is proof of Einstein’s legacy continuing, a testament to his immense foresight (and just incredible scientific chops).

This isn’t the farthest back we’ve seen. Non-infrared missions like COBE & WMAP saw the universe closer to the Big Bang (about 380,000 years after), when there was microwave background radiation, but no stars or galaxies. This makes multi-wavelength astronomy endlessly fascinating. Simply by adjusting which wavelength we are observing in, we can change the parts of the universe that we are able to see, adjusting dials on a time-machine, a kaleidoscope with heavenly controls.

Webb sees a few 100 million years after. ⁣Which—geologically—is still a heartbeat. Which makes the Webb amazing for studying topics that have stymied astrophysicists, ranging from galaxy formation to superstructure development. 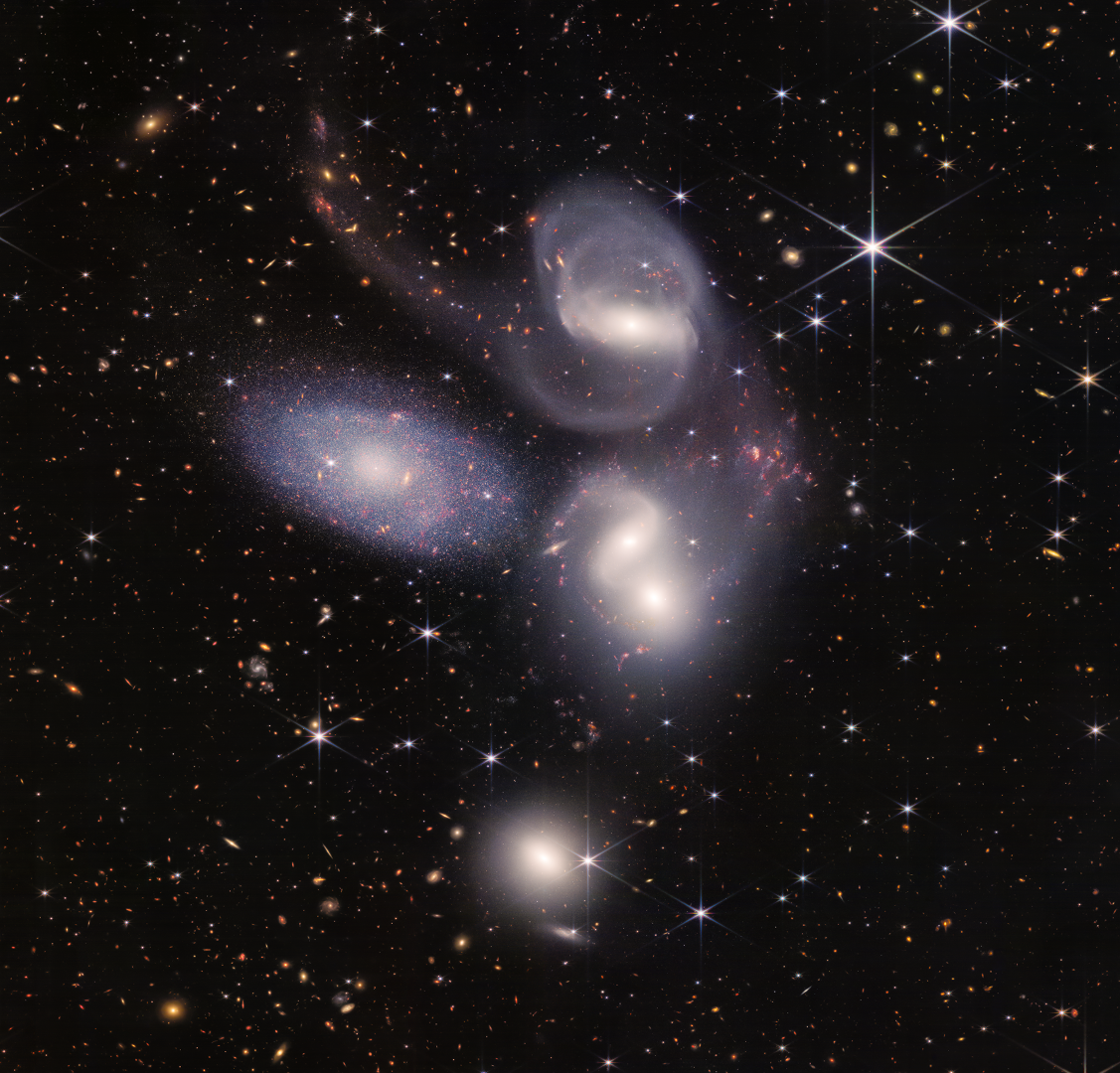 Next up in the James Webb Space Telescope’s first images is Stephan’s Quintet. This is one of the most famous galaxy clusters—at least in astrophysics—as it was the first compact galaxy group to be discovered. Here, we see five galaxies, four of which interact. (The left galaxy is actually much closer to us than the rest of the group.) It is fascinating to observe these connections within the galaxies as they are further evidence of the tremendous power of gravity.

The most prominent of the four fundamental forces (on a macro, relativistic level!) clusters like these show how galactic interactions are shaped by gravity, and how the filaments in between the galaxies are shaped by their collisions. These colliding galaxies are pulling and stretching each other in a gravitational dance. Webb will revolutionize our knowledge of star formation and gas interactions within.⁣

This mosaic is Webb’s largest image to date, covering an area of the sky 1/5 of the Moon’s diameter (as seen from Earth). The detail is exceptionally stunning given this size. The resolution scales beautifully between the first and second images, which is an immense technical achievement considering the vast difference in the angular sizes of both images. It contains more than 150 million pixels and is constructed from about 1,000 image files. Webb is the most complex and powerful space telescope ever built.⁣ Lines like these give me goosebumps!

Image 3: Southern Ring Planetary Nebula
Beyoncé is probably thinking about this one… 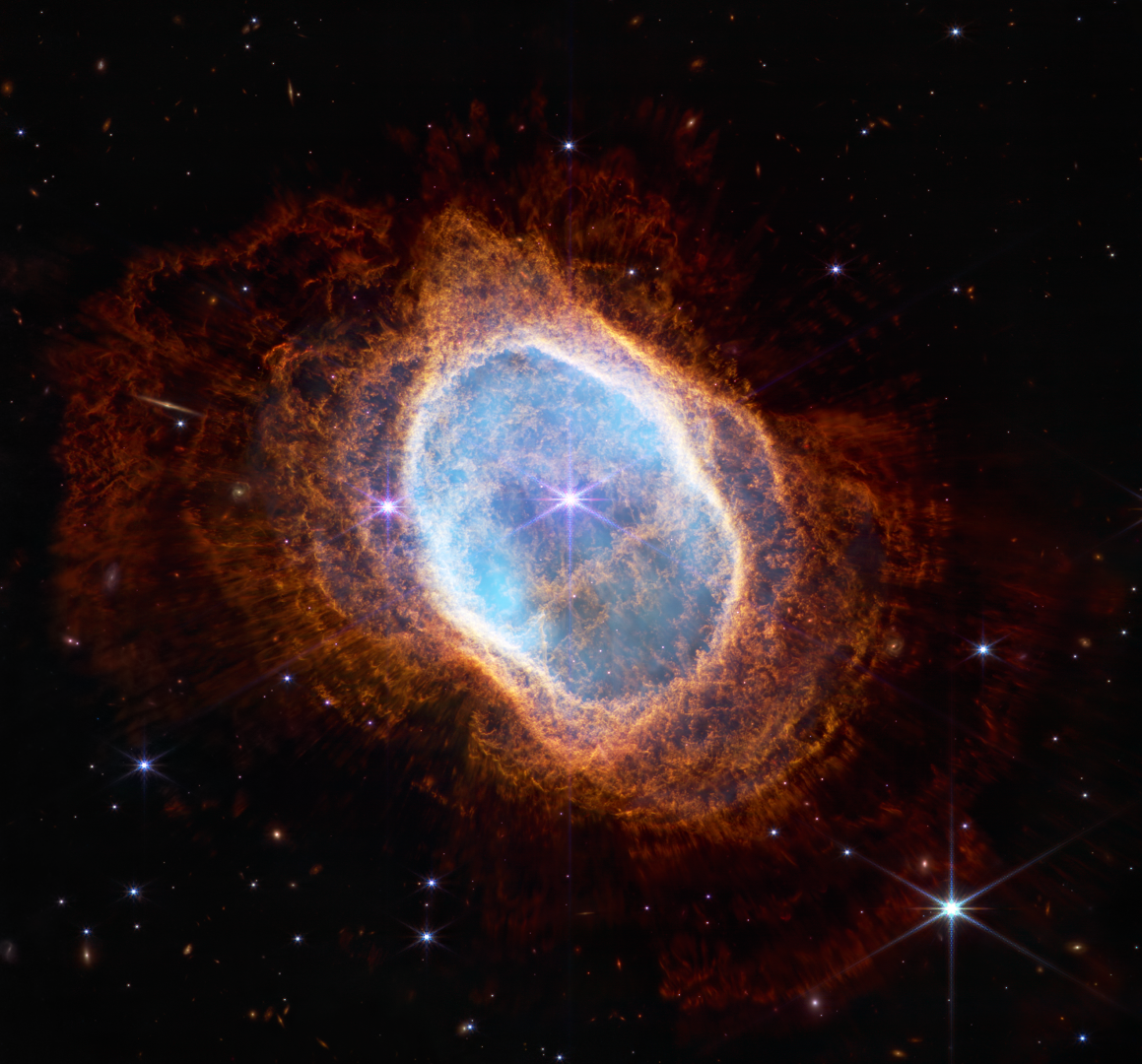 Ready for some more stunning first images from the James Webb Space Telescope? Is grass green? Swipe through to see views of the Southern Ring planetary nebula (aka NGC 3132) and its pair of stars, taken by two of Webb’s instruments: NIRCam [1] and MIRI [2].

These two stars put a new spin on “til death do us part.” The dimmer star, locked in orbit with the younger, brighter star, is dying — expelling gas and dust that Webb sees through in unprecedented detail. This is what makes binary stars so fascinating. They can be seen to be either in a mutualistic or parasitic relationship, but each differs depending on the star system.

What makes this so fascinating is that this system could be the progenitor to a Type 1a supernova; if enough material accretes onto the younger star, it could incite a runaway thermonuclear fusion reaction, resulting in the formation of a cataclysmic variable (check out the article on that!)  In fact, Webb reveals for the first time that the dying star is actually cloaked in dust. I love thinking about the minute details about stellar systems we can discover this way. It is a rather delicious feeling.

The stars – and their layers of light – steal more attention in the NIRCam image, while glowing dust plays the lead in the MIRI image. Fun physics alert! NIRCam covers a photon wavelength range from 0.6 to 5 microns, or the “near infrared”—close to visible light. The stars give off these photons in tremendous amounts as infrared radiation is one of the most prominent by-products of a thermonuclear reaction (just look at the heat we feel from the Sun!).

Meanwhile, MIRI observes the mid-infrared wavelength range, with longer wavelengths characteristic of cooler temperatures. As the glowing dust is much cooler than the star (duh), it shows up more in mid-infrared than near infrared. Yay physics! In thousands of years, these delicate, gaseous layers will dissipate into surrounding space.

The Southern Ring nebula is called a planetary nebula. Despite “planet” in the name, which comes from how these objects first appeared to astronomers observing them hundreds of years ago (continuing the trend of astronomers being terribly creative in their naming conventions), these are shells of dust and gas shed by dying Sun-like stars. (Read our series on the evolution of stars to learn more!) The new details from Webb will transform our understanding of how stars evolve and influence their environments.

Image 4: WASP-96 b Spectrum
As someone who’s researched spectra in the past (albeit in different contexts), this one excites me the most. The potential with a spectrometer this powerful is incredible.

The James Webb Space Telescope has spotted the unambiguous signature of water, indications of haze, and evidence for clouds (once thought not to exist there) on this planet. Quick lesson! Based on the way that water molecules split light, absorption with respect to the background can be easily measured and presence can be determined. Absorption spectroscopy as seen is the primary method of study in high-energy astrophysics. This is the most detailed exoplanet spectrum to date.⁣

A spectrum is created when light is split into a rainbow of colors. When Webb observes the light of a star, filtered through the atmosphere of its planet, its spectrographs split up the light into an infrared rainbow. By analyzing that light, scientists can look for the characteristic signatures of specific elements or molecules in the planet’s spectrum. More specific spectroscopy! In other words, you can think of this spectrum as a barcode for WASP-96 b’s atmosphere.⁣

Located in the southern-sky constellation Phoenix, WASP-96 b is 1,150 light-years away. Which seems tremendously far—and it is—but who knows, with the development of technology in the future, it may be within reach… It’s a large, hot planet with a “puffy” atmosphere, orbiting very close to its Sun-like star. In fact, its temperature is greater than 1000 degrees F (537 degrees C) — significantly hotter than any planet in our solar system. ⁣

Very Venusian. And although this particular exoplanet might not be the ideal life candidate, having a spectrum this sensitive is extremely powerful in our study of exoplanets, particularly when searching for candidates that can support human life (or any life!)  We have pretty good techniques for finding exoplanets using transit analysis (read my article on exoplanets for more on that!) but atmospheric analysis is always finicky. This makes the Webb’s spectrometer all the more powerful—its potential impact is revolutionary.

(The background illustration is based on what we know of WASP-96 b. Webb hasn’t directly imaged the planet or its atmosphere. Though Webb CAN image exoplanets directly, the images would just show a dot of light.) ⁣ 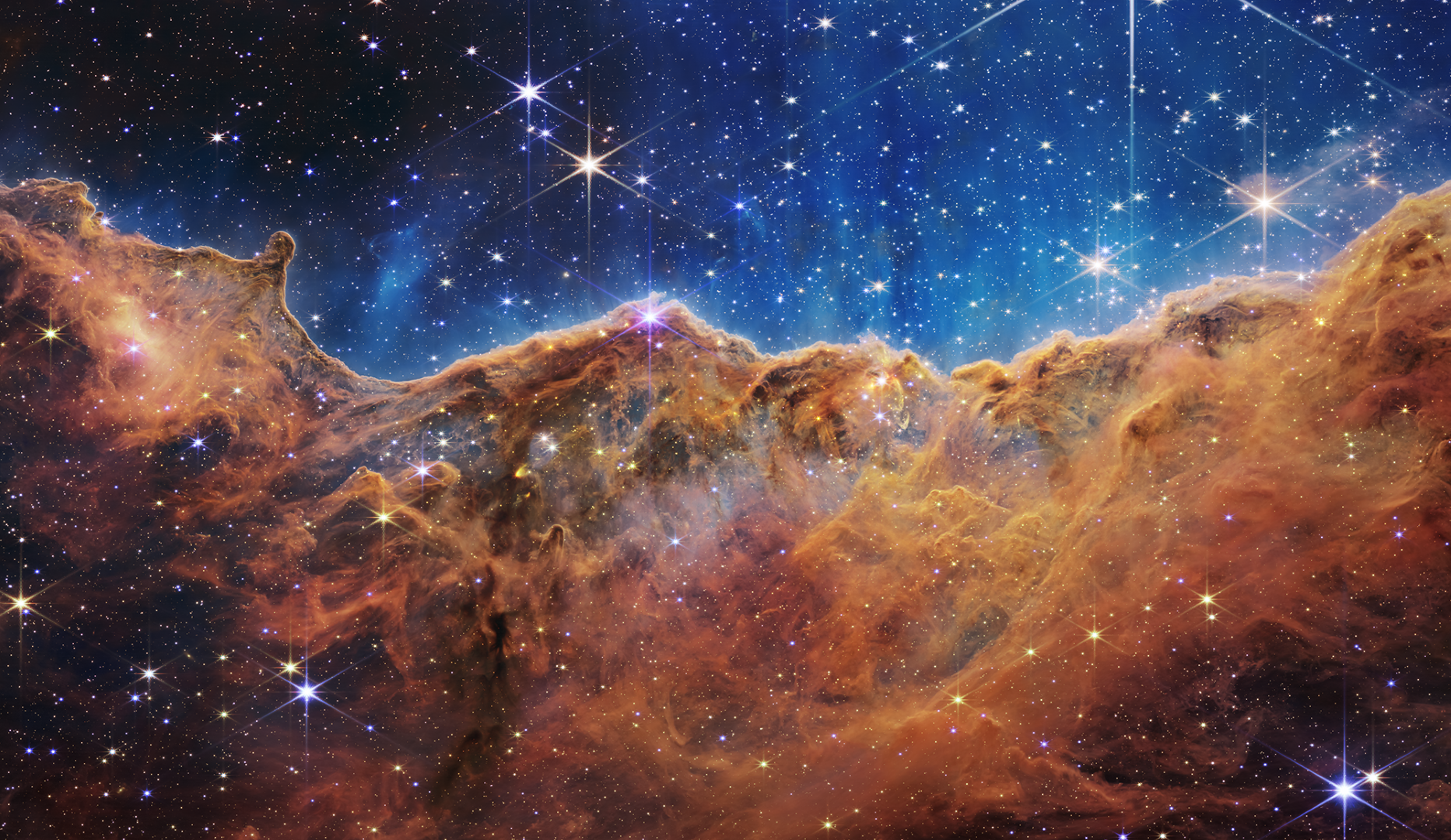 Here it is: the grand finale of the James Webb Space Telescope’s first images.⁣⁣ Woo!

Behind the curtain of dust and gas in these “Cosmic Cliffs” are previously hidden baby stars, now uncovered by the Webb telescope. Take a second to admire the Carina Nebula in all its glory.⁣⁣ Nebulae, as you all may know, are the birthplaces of stars. Therefore, getting a better view at nebulae through the Webb will allow us to gain a deeper insight into the ways that stellar evolution manifests itself, from the smallest, protostellar origins, into the mercurial and exhilarating plasma globules that are stars. With unprecedented detail, we can get an unprecedented understanding of the way that stars form.

Webb’s new view gives us a rare peek into stars in their earliest, rapid stages of formation. For an individual star, this period only lasts about 50,000 to 100,000 years.⁣⁣ This is a very narrow window from a universal perspective. Therefore, getting these glimpses—and taking valuable data from them—is essential for astrophysics. Heady stuff.

We have reached our first stop on our journey through the cosmos, riding Webb’s tremendous innovation and heart-stopping views. The future of the Webb is immensely bright. These set of images are heralds for more like them, new adornments for physics dissertations and electronic wallpapers alike.

We are in a new era of astrophysics research. With this bound in technology, we have bounded across the universe, and across time, a serendipitous expansion into our history, not simply as humans, but to our fundamental atoms, quarks, and gluons; all originating from that progenitor we call the Big Bang, and culminating in the glorious tomorrow.