I apologize for the extended hiatus from writing; it’s been an incredibly tumultuous time for me in terms of change. After 12 years of schooling, I have finally graduated, and am proud to be attending Yale University this fall where I hope to study physics along with computer science and economics (combining my love for the universe with my love for interdisciplinarity!) With decision-making, graduation, and so much more, my days have been filled with activity, and to say that I was busy would be an understatement.

But regardless, we are back.

This blog lives on y’all’s support, and I am so grateful for it. SkySimplified is a community effort, and it is through the foundation that you all create that I am able to publish my work. Thank you for waiting, and thank you for reading my articles; SkySimplified—and I—would not be the same without it. So here’s to my readers.

As we move into the future, it is important to be cognizant of the past. It’s been a while since we’ve taken a look at our own solar system, and I thought that it is time to return to it for some unexpected explorations. We’ve already discussed our Sun, but I think that it’s time to discuss what orbits it. What eight objects orbit it, to be precise.

We begin our eight-article series on the planets with the first one, and the smallest: Mercury. We’ll be discussing how it was formed, what it looks like, human exploration of it, and other delicious tidbits.

Mercury is the closest planet to the Sun. Its orbit takes a measly 88 days, meaning that one Earth year is about four Mercury years. If I lived on Mercury, I’d be 72 years old.

Which is a little crazy to think about.

Mercury has always been the little runt of the solar system. It is so small, its orbit is affected by Jupiter’s gravity, causing it to precess (or deviate) every cycle. This was quite the stitch in the side of astrophysicists for a while, as Newtonian mechanics was unable to properly describe Mercury’s precession, and no one knew why.

It wasn’t until relativity came along that Einstein realized the impact that Jupiter’s mass had, and by treating gravity as a distortion in spacetime rather than a force, he was able to correctly predict how Mercury would move and account for the precession. Pretty wild!

The composition of Mercury is interesting to look at. The inner core is solid, while the outer core is made of liquid metal. The crust of the planet rests on top of these cores, with a rocky mantle sandwiched between the two.

It is interesting to note that there are multiple layers of Mercury’s interior that are solid, compared to a planet like the Earth, where the inner core is the only solid interior layer due to the tremendous pressure applied by each of the external layers. 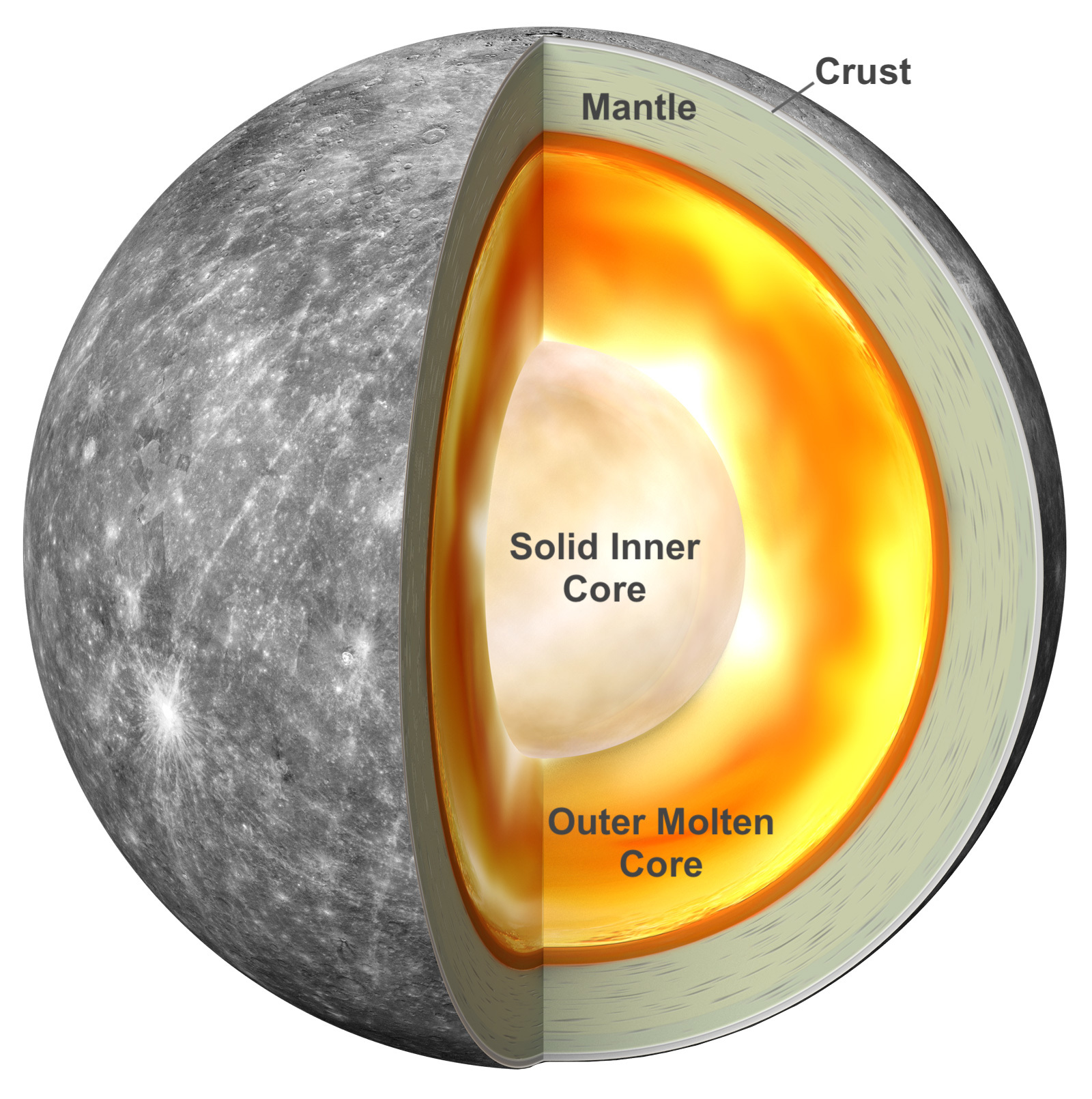 The surface of Mercury looks much like the moon; a desolate, extraterrestrial landscape rippling with ridges and craters. This is a product of its violent history. There is a plethora of evidence indicating that Mercury once had active tectonic zones with volcanoes and constant bombardment, but as the planet aged and moved closer to the Sun, much of the activity stopped.

Due to Mercury’s proximity to the Sun, it is tidally locked to it with a 3:2 ratio. In other words, with respect to nearby stars, it rotates three times for every two revolutions. (For reference, the Earth and the moon are tidally locked with a 1:1 ratio, one rotation of the moon is equivalent in duration to one orbit around the Earth).

Although Mercury once may have been habitable (evidenced by its structural similarities to the earth Earth), it certainly is not anymore. Surface temperatures reach a sweltering 800°F in the daytime and then plummet to a frigid -330°F in the nighttime. The perfect weather to throw your summer parties!

Further, the Sun has burned off whatever semblance of an atmosphere that Mercury might have had. This further contributes to the tremendous temperature swings. Without an atmosphere to trap heat and potentially control climate, the surface temperature will be almost entirely dictated on whether or not Mercury is facing the Sun. 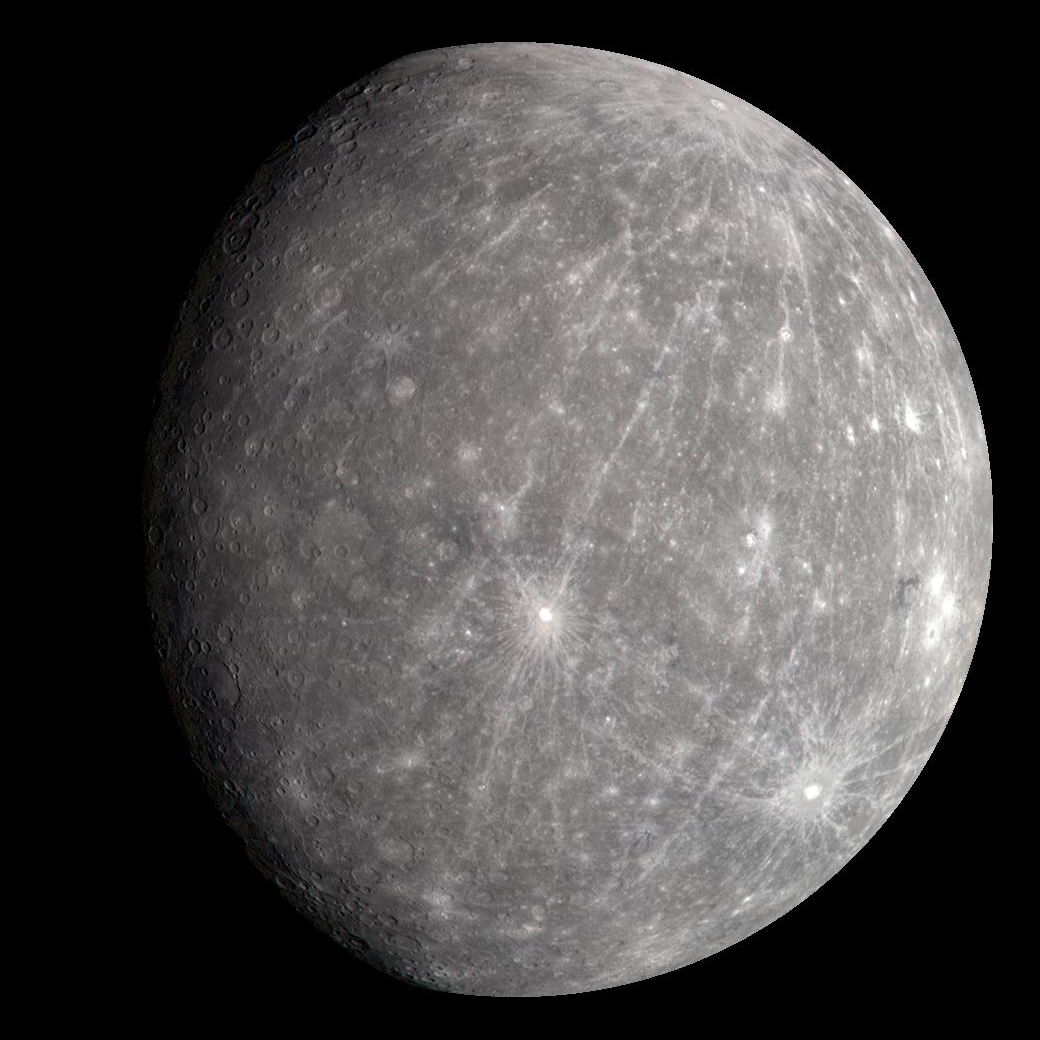 Due to Mercury’s size, it is very difficult to spot in the night sky. However, there is another way that humans can see Mercury: transits! (Read my article on Transits for more information—and, indeed, about a recent transit of Mercury) By passing in front of the Sun, Mercury can be detected as a shadow, a black speck in the great pale face of our nearest star. It is startling and quite beautiful to watch.

After Pluto was demoted from planet status in 2006, Mercury became the new smallest planet in the solar system. But it is still one of the most loved. Despite its size, it has captured the imagination of people throughout the world. And, indeed, NASA’s first mission was named Mercury in honor of the Greek god—and the planet.

Next time, we’ll be discussing Mercury’s neighbor (and our twin), Venus! Pack your sunscreen, because it’s sure to be scorching…