As we hurtle farther into the summer—and the longest day of the year approaches—optimism is in the air again like stardust. COVID cases worldwide are beginning to decline, and the light at the end of the tunnel seems to be getting bigger and bigger as we approach it.

With vaccination rates on the upswing, mortality rates decreasing, and more and more people rebounding, the world seems to be letting out a collective sigh of relief, and the hope that things will be back to normal before we know it is becoming more and more prevalent.

In the spirit of optimism, today we are going to continue our discussion about the Apollo program with the next leg of missions: Apollo 12 and 13! Apollo 13, is, of course, one of the most famous missions out of them all. But we will discuss that in detail later.

So, without further ado, let us begin our penultimate sojourn to the moon!

After the tremendous success of Apollo 11, morale in the American public was at an all-time high. This feeling of happiness was not limited simply to the United States; the moon landing was an achievement for humanity. In a mere 66 years, humans had gone from the first ever powered flight to an interplanetary trip to the moon!

The Apollo program got a tremendous boost from the success of Apollo 11 as well. Congress was much more inclined to fund the mission seeing the impact that it had on the public, as well as the political pressure that it applied on the Soviet Union.

The Apollo 12 mission was meant to be a step-up in scientific exploration from Apollo 11. It carried more sensitive scientific instruments, as well as a color TV camera. NASA demonstrated that it could land astronauts with pinpoint accuracy when the LM touched down mere feet away from the Surveyor 3 lunar probe, further stoking public excitement in the space program. From a scientific perspective, this meant that any areas that were scientifically relevant were within reach for the program.

The landing site of Apollo 12. The probe Surveyor 3 is in the foreground next to the astronaut. The spacecraft in the background is the Lunar Module

Rounding off of the immense success of Apollo 11 and 12, Apollo 13 had the goal of furthering the scientific discoveries the missions had. Three astronauts, Jim Lovell, Ken Mattingly, and Fred Haise were selected for the mission. However, due to exposure to rubella (a measles-like disease), Mattingly had to step down, and astronaut Jack Swigert took his place.

The beginning of the mission passed without major issue. The astronauts lifted off from Earth on April 11, 1970, and prepared for the three-day journey to the moon.

The astronauts carried a TV camera in the capsule with them, and broadcasted their life on board as well as their various duties live back to Earth. This generated slightly increased public interest in the mission; viewing the weightlessness of space was a new experience for the vast majority of the public.

Six and a half minutes after the TV broadcast concluded, the astronauts heard a sudden noise in the capsule. Looking out of the capsule window, they noticed a liquid being jettisoned from the craft. They radioed a now-infamous message back to Earth:

“Houston, we’ve had a problem.”

During a routine stir of the oxygen tanks, a wire with stripped insulation was exposed to the liquid, which ignited, causing the tank to explode and the oxygen to be jettisoned. With the oxygen of the main capsule vanishing the life support systems began to fail.

The spacecraft being in such critical condition meant that the lunar landing had to be scrapped; the astronauts would not have enough oxygen for a trip to the surface of the moon and back to Earth.

The astronaut’s lives were in imminent danger. Scrambling around the clock, mission specialists at NASA worked to find a solution for them to keep them alive and bring them back to the Earth.

Firstly, the astronauts were moved into the Lunar Module from the rapidly depleting command module. Using this as a “lifeboat”, they were able to maintain contact with NASA while remaining in relative safety. 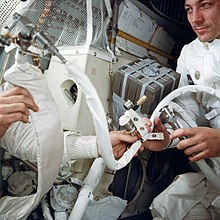 Swigert repurposing materials for their lifeboat

Astrodynamicists at NASA developed a trajectory orbit that would have the spacecraft slingshot around the moon and use the gravitational assist to return to Earth with limited fuel.

Over the course of an incredibly tense 4 days, the astronauts redirected their engines and slingshotted around the moon, reaching the farthest point in space any human has ever traveled: about 249,000 miles away from the Earth.

Conditions for the astronauts deteriorated as the mission progressed. Due to the loss of power, the temperatures inside the capsule dropped to 38° Fahrenheit. With the fear of CO2 filters running out, astronauts had to makeshift a CO2 cleaner with what they had on board to maintain their life support. 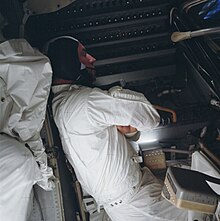 Lovell attempting to rest in the frigid conditions

And yet with each uncomfortable minute, the astronauts were getting closer and closer to the Earth. As they neared the atmosphere, they navigated back into the Command Module for the re-entry.

Detaching the Lunar Module, the astronauts began re-entering the Earth’s atmosphere on April 17. For a harrowing few minutes, the astronauts waited to see whether the heat shield would hold. Luckily for them (and for posterity), it did.

The command module splashed down in the South Pacific Ocean where it was picked up by the USS Iwo Jima. The landing was watched by tens of millions of people.

The three astronauts were felicitated upon their return. President Richard Nixon awarded them the Presidential Medal of Freedom. The Pope at the time led prayer sessions to ensure their safe retrieval. It was one of those unique moments where the entire world was hoping that the lives of three humans would be saved. The astronauts wave upon safe return to the Earth

The Apollo 13 mission is one of the most vivid examples of the tenacity of humanity, and the importance of remaining calm during a crisis. What could’ve been a terrible accident was saved by sheer nerve and intelligent usage of resources.

As we move into the future, it is important to remember Apollo 13 and remember the lessons that it taught us. We never know when we might need them.