The world in the past month has kept turning, and fascinating scientific phenomena keep occurring. Through some meteorological glitch, the mostly-desert state of Texas has been experiencing snow for the first time in 35 years. NASA’s Perseverance rover (affectionately named Percy) is hours away (at the time of publication) from landing on the surface of the Red Planet. Read my blog article about the same here to learn more about what’s on it and what it’s doing!

And most optimistically, perhaps, the virus seems to be on the downswing, with cases reducing as vaccinations increase. Of course, it is too early to be certain, but a phrase that I like to use is cautious optimism. In today’s world especially it’s to be cautiously optimistic about the future.

Amidst all of these exciting developments the wheel of human research keeps moving, and our discussion of the universe heads into new and exciting territories. Over the course of my past articles, I’ve set a framework of some of the more fundamental concepts of the universe. It is time to now foray into the intricacies of the cosmos, exploring some of the most fascinating tenets that make our universe what it is!

To start off our exploration into these fascinating components, we will begin with the quasar. We have already discussed the fundamental object at the center of a quasar (in our very first post!) But we will go into a much more in-depth discussion today about what makes these things what they are.

First of all, let us dispel some mist. For the members of the public to whom astronomy is not second nature, a quasar can be an alien (pardon the pun) concept. The fact that it sounds rather similar to a completely different celestial body—a pulsar—does not help to simplify matters.

So to be clear: quasars and pulsars are two different things.

Now let’s get into what exactly a quasar is!

The word quasar is a composition of the words quasi-stellar radio source. This interesting phrasing is due to the fact that when observed initially, most quasars resembled stars. 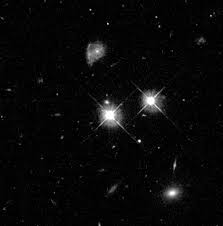 Credit: Ohio State
This image demonstrates how distant quasars may look like stars.

The main distinguishing factor between quasars and supermassive black holes is that quasars are extremely luminous, giving off a tremendous amount of radiation.

Here, the mire gets stickier. As we discussed in my post about black holes, black holes are called black holes because they do not produce light of their own! If that is the case, how can quasars be luminous?

And to answer that question, we need to explore the morphology (or structure) of these fascinating objects.

Here is an interesting diagram:

Credit: The Physics of the Universe

The main radiation-driving process in a quasar is its accretion disk. This is what the Event Horizon Telescope (EHT) captured when the first picture of a black hole was published to the world. An accretion disk is essentially a band around the quasar of gas, dust, and assorted debris falling into the quasar. As the material spirals inward, falling towards the tremendously strong gravity, it starts to interact with itself.

Have you ever felt your hands get cold on a winter day? A good way to warm them up is to rub them against one another.

By rubbing your hands against each other, you are generating friction. This, in turn, generates heat. The faster that you rub, the warmer your hand feels! This same principle is in play in an accretion disk.

As previously mentioned, quasars have incredibly strong gravity. More gravity means that any material in its gravitational field is going to have a higher acceleration. More acceleration means that the material is moving faster, meaning that it is brushing, bumping, and rubbing against itself faster, causing friction! As velocity increases, as the volume increases, this amount of friction generates tremendous amounts of heat.

And the quasar glows.

This process is how we can discover quasars so easily! The radiation that they give off is in tremendous quantities.

Knowing that quasars exist and understanding the processes that drive them are incredibly useful pieces of information. Accretion disks have different spectral profiles than stars; essentially, depending on the quasar, it could have bright radiation in one wavelength, or bright radiation in another. There are radio-bright and radio-quiet quasars, weak emission line quasars, even something as exotic as optical violent variable quasars. All these different types of quasars have different spectral profiles, and all of them can be used for different purposes.

Some of my favorite research that has been conducted with quasars covers a broad area of astrophysics. Quasars proved to be another support for Einstein’s theory of relativity as the image of the first black hole (a quasar!) showed the characteristic light-gravity interactions that relativity predicted. Quasars were instrumental in solving the missing baryon problem in physics by shining light through (and allowing astrophysicists to discover) filaments of plasma and ionized gas known as warm-hot intergalactic medium in which the missing baryons resided. Quasars showed evidence of gravitational lensing, further supporting Einstein’s physics.

As we go into the future, quasar astronomy is a metaphorical (and literal, I suppose) shining star of research. The sheer amount of information that can be gleaned from them is fascinating. And I hope that we will use the veritable repository of data they encompass to expand the horizon of human knowledge further.