The Space Shuttle: Part I

Optimism seems to be dissolving at the edges slightly as the Delta variant of the SARS-CoV-2 virus surfaces around the world, causing case numbers in unvaccinated areas to increase. People are starting to worry about increasing levels of the pandemic once more.

It is important in the face of these new developments to prioritize safety. Even vaccinated people should maintain mask-wearing when around other people—especially indoors. Unvaccinated people especially should continue to wear masks, as they are at a higher danger level.

Despite all of these fears, continuing what we have been doing so far is the best strategy to combat the pandemic. Keep wearing masks, keep social distancing, keep maintaining hygiene. And hopefully we can hurtle towards the end of the tunnel sooner rather than later.

The Space Shuttle represented engineering as had never been seen before. The biggest advancement the Shuttle achieved was the ability to reuse some of its materials, notably the solid-fuel boosters.

The Space Shuttle was also instrumental in the establishment of several notable spacecraft and satellites, responsible for taking them into low-Earth orbit, and, in some cases even farther. The Galileo and Magellan spacecraft, the Hubble and Chandra space telescopes, and, perhaps most notably, parts of the International Space Station all made returns to humanity due to the Space Shuttle.

But I’m getting ahead of myself! Let’s take a step back and talk about how this program became a reality.

At the conclusion of the Apollo missions, NASA was beginning to think of a new class of mission, prioritizing something that seems antonymous with trips to the exosphere: reusability.

When one thinks of space and rocketry, an image of consumption comes to find. Fiery infernos burning through fuel, tremendous power generated from complex one-way chemical interactions. However, the nature of this consumption is that the economical viability of missions decreases over time; constructing new equipment for each launch is not a sustainable practice.

The Space Shuttle was a breakthrough in this frontier. It combined the design of an airplane and a rocket, with the most reusability of any spacecraft created till that point.

It had three main components. The actual shuttle, or the orbiter; the solid rocket boosters, the white rockets on either end; and the fuel tank, the orange-brown structure in the center.

The Space Shuttle had a novel technique to circumvent the consumption problem. A shuttle launch would follow these steps. 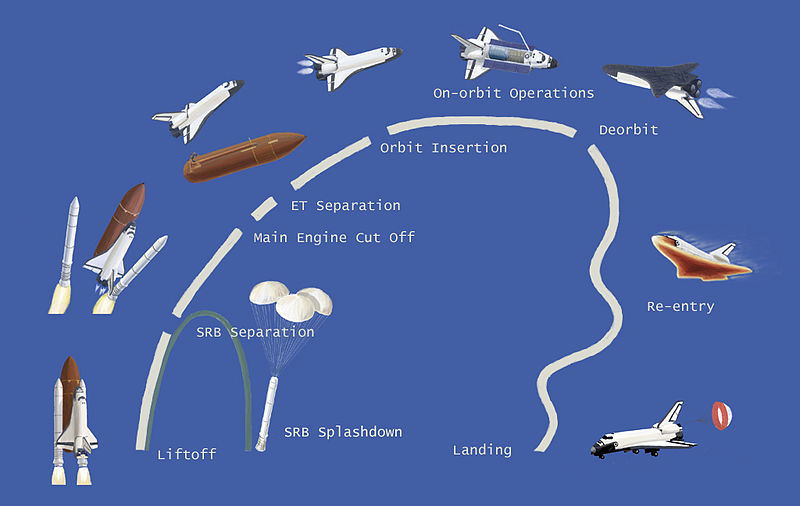 During takeoff, the solid rocket boosters would draw on the tank and lift off, providing enough thrust to get into the upper reaches of the atmosphere. They would then fall off and land in the ocean, where they’d be retrieved and refilled for future flights.

The Shuttle would continue to climb until reaching its orbit altitude, where the fuel tank would empty and fall. It would then burn up during re-entry, being the only non-reusable component of the launch.

The orbiter would then complete its mission and fire its engines to begin re-entry into the Earth’s atmosphere. Its heat shields would protect it from burning up upon re-entry and it would glide towards a runway, where it would land like a plane. Due to its increased velocity, it would further require parachutes to slow it down enough. 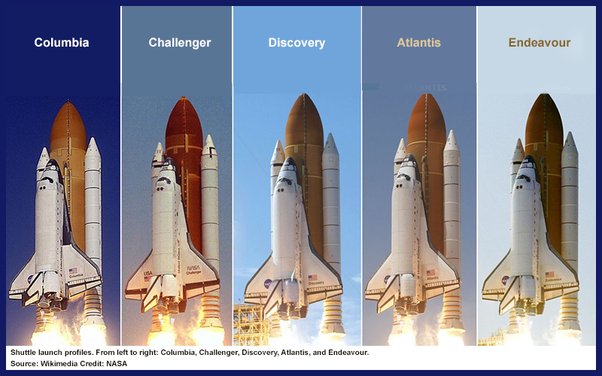 Five orbiters were constructed. The trial Enterprise, followed by Columbia, Discovery, Challenger, and Endeavor. After the tragic Challenger accident (which we’ll discuss in more detail next post), a sixth orbiter, Atlantis, was built.

The Space Shuttles formed the cornerstone of the American space program for three decades, conducting important science while inspiring a new generation of children to pursue exploration of the universe. We’ll discuss the most important missions and the prognoses of the orbiters over the course of the next few weeks.