The times that we live in continue to traverse towards tumultuousness. It seems as though there is almost no sign of positive change in the near future. With Supreme Court precedents taking away human rights as the pandemic continues to take lives, it is always easy to lose hope in times like these.

It makes it all the more essential, however, that we do not.

Donate. Use your platforms to protect human rights. Support organizations that are working to maintain these. There is always hope in the world— one just has to look for it. And I, for one, have hope that we can emerge from this terrible today into a much better tomorrow.

In the spirit of optimism, today’s article will be an in-depth exploration of the brightest planet in the night sky: Venus. Known as Earth’s “ugly twin” (a terrible misnomer in my opinion as the swirling cotton-candy clouds are extremely aesthetic), Venus is the closest planet to Earth and the closest in size, too. But all of that is to come!

My advice is to stay hopeful. Change can always be made by those with a clear goal in their minds, and I know that we can see it happen.

So sit back, relax, and let us journey to the caramel skies of Venus!

Venus has often captivated the imagination of humanity in one way or another. Star Wars’ Cloud City is based on the Venetian atmosphere. One of my favorite albums by Afro-German disco band Boney M is titled Nightflight to Venus. The Botticelli painting “The Birth of Venus” depicts the famous planet- wait, I’ve gotten it backwards!

And, indeed, this is where Venus gets its name from. Due to its presence in the early morning and evening skies, Venus was considered “the lady of the twilight”, and was named after the Roman god of love and beauty. Looking at a picture of the planet, I’m sure that you can agree that it lives up to its namesake.

Venus was discovered during ancient times as it appeared consistently during the dawn and the dusk. While it was believed earlier to be two separate celestial bodies, each appearing at a different time, it became clear with further analysis that Venus was just one planet that would be visible at different places depending on the Earth’s rotation.

As Venus is the second closest planet to the Sun visible to the naked eye, this discovery was compared and corroborated globally, and was used to reaffirm the definition the Greeks had established as to what a planet was.

It wasn’t until the development of modern spectroscopic techniques in the late 19th and early 20th centuries that astronomers started looking at Venus with interest. The more they looked, the more fascinating information they found. 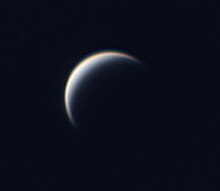 This quirk is a product of Venus’s violent creation. During the period of the early Solar System, the size and the angular momentum of planets were determined by their proximity to the Sun as well as their contact with fast-moving transient objects entering their planetary neighborhood.

These collisions created another interesting effect. Venus’s axial tilt is a tremendous 177.3° (compared to Earth’s 23.4°). This means that Venus rotates in the opposite direction as Earth. Let us now talk about Venus’s atmosphere. The swirling, ochre clouds may seem inviting, but are quite the opposite; they are primarily made of sulfuric acid, and the atmosphere under them contains more than 95% carbon dioxide, with traces of sulfur dioxide and nitrogen. I’m sure that the smell would be astounding…

Further, the tremendous weight of the clouds above creates an extremely high-pressure environment on the surface. Very few probes have been sent to Venus, including the Soviet Venera missions and the American Pioneer missions. These were essential in understanding the composition of the clouds and the atmosphere, as well as in understanding how their internal structure was developed. However, the probes did not last on the surface, succumbing to the tremendous pressure and loss of fuel. 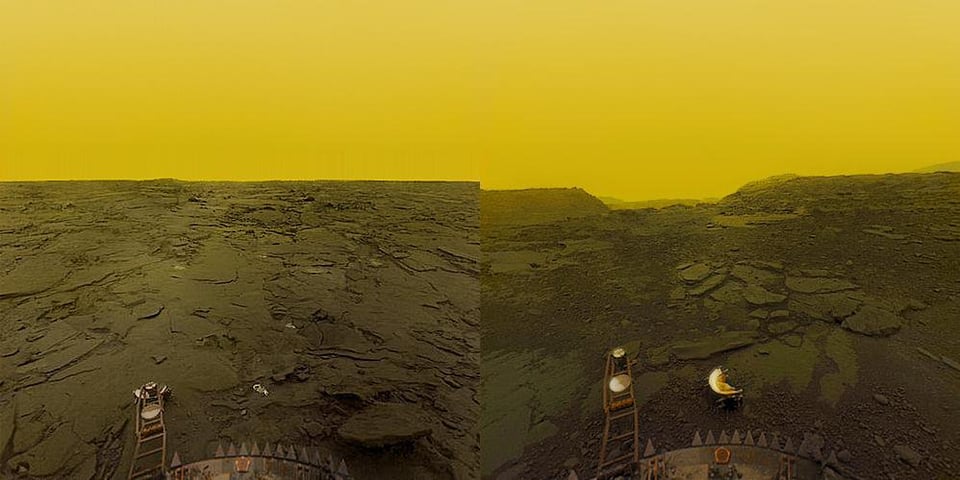 Images of Venus’s surface, taken from the Soviet probe Venera 9

Scientists believe that Venus might, once, have been habitable–much like its twin. But due to its motion closer to the Sun, much of the water evaporated, and with a runaway greenhouse effect, most of the water evaporated into the atmosphere, creating dramatic climate change. Now, Venus is the hottest planet, with surface temperatures reaching a sweltering 900°F. Although it isn’t the closest to the Sun, the greenhouse effect generated by its tremendous atmosphere results in a pseudo-oven forming on the surface. Not a fun location for any cookout…

And yet, perhaps one day, life may sustain here. An exciting discovery in 2020 noted that the Venetian atmosphere might have phosphine, an organic compound essential for life. Although that claim has since been challenged, it opened the book to finding life on similar planets. Much like George Lucas’s imagination constructed, if life is to exist on this planet, it would be in the clouds. Who knows? Maybe one day we will develop the technology to settle amidst the swirling, cotton-candy wonders.

Next time, we will continue our odyssey of the Solar System with Mars. (Skipping over the Earth; sorry, but that is a much better topic for a geology blog) But get ready for some oxidized soil and giant volcanoes…